Interview with Florian, Process Engineer in Shreveport/Louisiana by Joshua Crawford 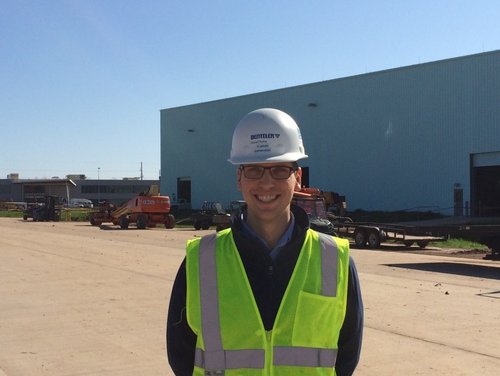 Here at BENTELER, we love to introduce members of our fantastic team to other BENTELER employees and the industries that we represent. Today I had the privilege of sitting down with a colleague and friend, Florian, a Process Engineer for our Hot Rolling Mill in Shreveport, Louisiana.  Florian and I met under unusual circumstances.  Last October, after only being employed with BENTELER for three days, I found myself preparing to fly to Pittsburgh for a job fair with three other members on our team.

It was the first time I had a chance to meet these individuals and being new to the company, I found myself feeling like it was the first day of school. However, the entire team was very friendly and we passed pleasantries until it came time to board our flight. Little did we know what the trip had in store.

Soon after the plane took off we found ourselves dodging huge thunderstorms filled with turbulent skies. The storms were so large that the flight was diverted hundreds of miles in the wrong direction in an attempt to avoid the dangerous conditions. We finally got ahead of the storm and landed in Atlanta, but of course missed our connecting flight. As the four of us sat in the airport worried about how we would make it to Pittsburgh in time for a full day of interviews, our only option to ensure our success became clear--we had to drive!

Florian, as a native of Germany and new to the United States, was extremely excited for our road trip and his enthusiasm was infectious. We briefly considered renting Corvettes and racing each other to Pittsburgh, but eventually settled on a minivan. After a seven hour drive through the beautiful county side, we made it to our destination in time to complete all of the scheduled interviews.

I wanted to share this story because from my first encounter with Florian, his energy and passion really impressed me.  The enthusiasm displayed by Florian during our trip is not a personality trait strictly reserved to cross-country drives, but flows into his professional life as well.

Florian has been with BENTELER for three and a half years and started his career in Paderborn, Germany. He is now taking part in the commissioning of multi-million dollar pieces of equipment and he ensures that the processes are established successfully.  When I asked Florian how he found out about BENTELER, he replied, “I came across a job advertisement in a German professional newspaper. I always knew that I wanted to work in an industry with hot metal. I liked what BENTELER stood for, being a family owned company. BENTELER seemed like a place where I could learn and grow professionally.”

As the idea of a hot rolling mill in Shreveport became more and more a reality, Florian knew he had to be a part of the massive undertaking. I asked what excited him the most about the opportunity and he said, “Josh, how could you not be excited about such an opportunity?  This is such a high profile project for BENTELER and the chance to live in a new country! I always wanted to visit the USA and the perfect opportunity came available. I wanted to expand my horizons!”

To which I responded, “What did your friends and family think once you told them?”

Florian smiled and stated, “They were very happy. They were a little sad. Everyone was so proud and they were very excited. You cannot deny the 5,300 Miles between us. Sometimes it is challenging but still very exciting.”

When asked what excited him most, Florian replied, “I’m gaining a lot of experience and I hope to use it to propel my career. I hope and think my career will still be with BENTELER.”

Florian explained, “BENTELER is great place to work and offers plenty of opportunities. If you want to be part of a great team and want to work on something exciting, then I cannot think of a better place to be.”

In Florian’s three and a half years at BENTELER, he has travelled the world, seen and experienced things he never imagined…even if some of those sights were viewed in the front seat of a minivan headed to a job fair in Pittsburgh with three new friends.

Take a look at our most popular jobs.